I'm going to try something a little different today.  Recently I had the pleasure of talking to Luke Murphy, pro-hockey player turned published author. 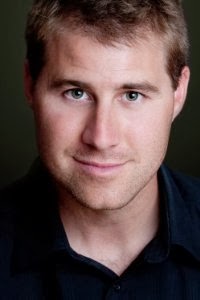 We spoke about his first book, Dead Man's Hand, and he shared with me where he got his inspiration and how he went about writing and marketing it.  The answers were so intriguing I thought I would share the interview with my readers. 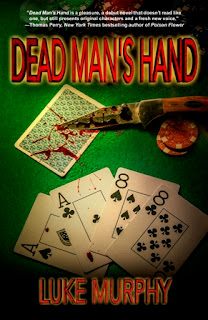 1.  What was your inspiration for Dead Man's Hand?


I never thought much about writing when I was growing up.
But I was always an avid reader, which I owe to my mother. She was a librarian, and although I lost her when I was young, I will always remember a stack on Danielle Steele books on her bedside table, and a lot of books lying around the house at my disposal.
My first chapter books were the Hardy Boys titles, so they are the reason I love mysteries. As an adult, some of my favorite authors are Harlan Coben, Michael Connelly and Greg Iles, so naturally I write what I love to read – mystery/suspense novels. DEAD MAN`S HAND has been compared to James Patterson books, which to me is an honor. Maybe in style (short chapters, a quick read), as I have read many of his books.
Plot: I get my ideas from stories I hear about, whether through reading (newspapers, magazines, etc.), what I hear (radio) or what I see (TV, movies, internet, etc.). The plot is completely fictional. I wouldn`t say that one thing or person influences my writing, but a variety of my life experiences all have led to my passion in the written word. There is not a single moment in time when this idea came to be, but circumstances over the years that led to this story: my hockey injuries, frequent visits to Las Vegas, my love of football, crime books and movies. Dead Man’s Hand became real from mixing these events, taking advantage of experts in their field, and adding my wild imagination. The internet also provides a wealth of information, available at our fingertips with a click of the mouse.
Setting: I usually set my stories in cities I`ve visited and fell in love with. Las Vegas was the perfect backdrop for this story, glitz and glamour as well as an untapped underground.
Characters: I have never been involved in a homicide investigation, LOL. Although I am not a 6’5”, 220 pound African-American, I’ve used much of my athletic background when creating my protagonist Calvin Watters. Watters past as an athlete, and his emotional rollercoaster brought on by injuries were drawn from my experiences. His mother died of cancer when he was young, as mine was. There are certainly elements of myself in Calvin, but overall, this is a work of fiction. I did not base the characters or plot on any real people or events. Any familiarities are strictly coincidence.
I’ve always been a self-motivated person, and my harshest critic. Whether it was in school, hockey or writing, I’ve been the one to put the most pressure on myself to succeed, to be the best in everything I try.

2.  How did you go about marketing your book?  What have you found to be successful and not so successful?

Once my publishing contract was signed, then the real work began, building my "plateform".  I knew that when I signed on with a smaller publisher that the bulk of the promotion load would fall on my shoulders, and I accepted that.
I did four things quickly: created my own website, started a blog, and opened a Facebook page and Twitter account.
Now, I have been fortunate to have had many jobs in my life, jobs that have created interest in not only myself, but what I do.
Here are some things I did next:
When my book was released in October, 2012, I felt I had a solid foundation to stand on, but I still had a long way to go.
I contacted media for interviews, held book signings, joined shows and blog toured. I contacted anyone who wrote a blog and asked about being a guest. I joined Pinterest, Linkedin, and Google +, as well as sites created to support Indie authors. I did anything I could to get my name out there, get my book in front of readers.
My publisher set up special promotions where my book was FREE on Amazon for certain periods of time. All of this was done to increase my following, and expand the awareness of my book on a worldwide scale. This will hopefully lead to future sales with not only my debut novel, but subsequent books if I’ve fortunate enough to write more.
I’ve been happy with the result thus far, but I don’t have anything to compare it to. I feel that the more books I write, the more success I will have. The more I get out there, the more excitement and interest is garnered.
It’s a marathon, not a sprint.
I know that the ebook and technology era has taken over the publishing industry, but I still love my book signings. I love meeting people face to face, making that personal connection and receiving their feedback. With social media, I’d have to say that Twitter has been my number one source for meeting new people and spreading the word about my writing.

3.  What would you like readers to take away from your novel?

I hope they would be entertained, satisfied that the book was well worth the while to sit down and keep them glued to the pages from start to finish. I want readers to, like when I read, have the opportunity to leave their everyday lives and for just a moment, be in another place and time. Living through my characters, following them and being a part of something special.

4.  What was the hardest part of writing your novel?

For me, the most difficult thing about writing has nothing to do with actual writing (ideas, flow, writer`s block, etc.), but it`s finding the time.
Between teaching and tutoring, with three small children and a wife at home, finding the time to sit down at a computer and have serious, quality writing time is almost impossible.
But I love my girls and spending quality time for them is a great feeling. I wouldn’t give up my games of ring-around-the-rosie and duck-duck-goose for anything in the world. It just puts writing my next novel behind a bit.

I learned how patient, persistent and thick-skinned I am.

My first chapter books were the Hardy Boys titles, so they are the reason I love mysteries. As an adult, some of my favorite authors are Harlan Coben, Michael Connelly and Greg Iles, so naturally I write what I love to read – mystery/suspense novels. DEAD MAN`S HAND has been compared to James Patterson books, which to me is an honor. Maybe in style (short chapters, a quick read), as I have read many of his books.
“Kiss the Girls” by James Patterson was the first adult crime-book I ever read, and I fell in love with the genres. I read a lot of James Patterson in the late 90’s. Probably my favorite crime book to date is “The Poet” by Michael Connelly.

7.  How long did it take you to write your book?

Feeling that I was finally prepared, in the winter of 2006, with an idea in mind and an outline on paper, I started to write DEAD MAN`S HAND. It took me two years (working around full time jobs) to complete the first draft of the novel.
I then worked with editors and joined a critique group, doing anything I could to learn, to improve my writing and my novel to point where I could create the best possible work.
My years of hard work finally paid off. With my dream still in mind and my manuscript ready, I hired the Jennifer Lyons Literary Agency to represent DEAD MAN`S HAND.
I signed a publishing deal with Imajin Books in May, 2012.

8.  Tell me about how you went from pro-hockey player to published author.
Writing just kind of happened by accident.
Growing up I never thought much about writing, but I was an avid reader. The only time I ever wrote was when my teachers at school made me. I wanted to be an NHL superstar…period.
It was the winter of 2000, my second year of professional hockey, and I was playing in Oklahoma City.  After sustaining a season ending eye injury (one of the scariest moments of my life), I found myself with time on my hands.
My girlfriend at the time, who is now my wife, was attending a French college in Montreal. She received an English assignment to write a short story, and asked me for some help.
I loved the experience—creating vivid characters and generating a wire-taut plot. I sat down at my roommate’s computer and began typing. I wrote a little every day, around my intense rehabilitation schedule and before I knew it I had completed my first manuscript.
I didn’t write with the intention of being published. I wrote for the love of writing.
Thirteen years later, I still write for pleasure—and I still love it! The fact that I am being published is a bonus.

To purchase Luke's book on Amazon, follow this link.

Join me tomorrow for Part II of Luke's story.